It might be difficult to find a herringbone seam treatment any simpler than this...well, I suppose we could take it down to only one french knot! But, even though it is simple...isn't it cute!

Using the little pearls instead of French knots does dress it up somewhat!
And, here's a little bonus photo...this block has three pieces of lace...and then nothing but herringbone stitches! Specifically, it is TDiTM Stitches 100 through 111...and I think they play nicely together! 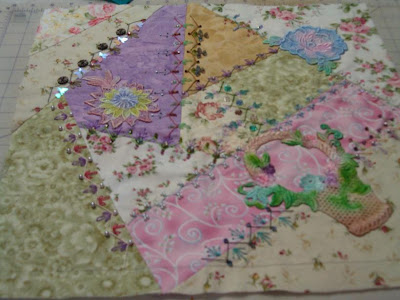 Who says that the same style of stitch can't be used multiple times in a block! Ha! Now, it's ready for some motifs in the patches!