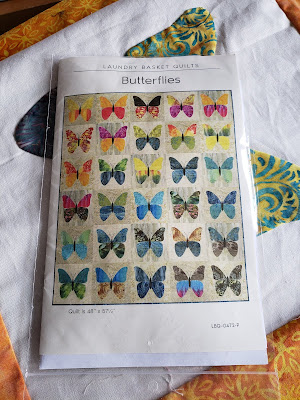 I've liked this Butterflies pattern by Laundry Basket Quilts for some time now. Thought I'd do a slightly different layout with some batik fabrics. Wanted to use what was already on hand, so grabbed a layer-cake of batiks and some light background fabrics. The pattern uses blocks that are about 10" finished...but I didn't have enough batiks for so many blocks. So, cut my backgrounds at 12" finished and inserted some sashing between the rows/columns to fill out the size. 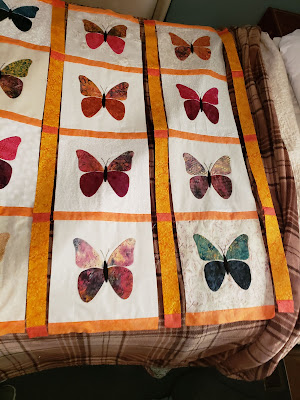 Found a trio of batik fat quarters...just enough to cut the sashing at 1.5" finished (2" cut). Here is the grid layout (yes, I didn't make the bed this morning). 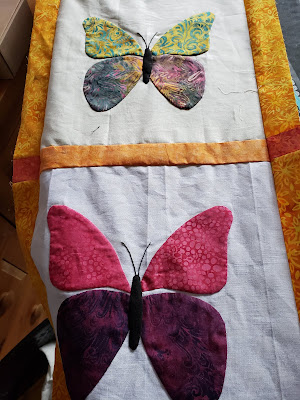 These butterflies are hand appliqued with turned under edges. The antennae are embroidered using Stem Stitch in black. I like the pattern so very much, thinking about doing a fusible version wall-hanging for myself (or maybe a grand-daugther?) as well when this quilt is done.

Our quilt guild had a little challenge...and we could "share them" today. The idea was to make a quilt that had at least twelve blocks...of any size/type...and the quilt needed to include a traditional elongated diamond shape of a kite.

This was my entry...and will be going to my grand-daughter that turns 3 years old the beginning of next year. 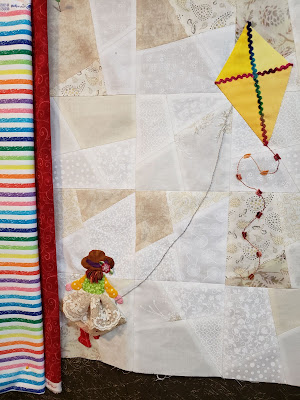 This photo was on my design wall, so borders had not been attached...but I think you get the idea. The little girl is dimensional applique and the kite is standard applique. 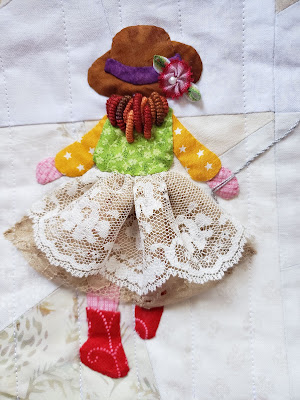 Here's the close up view of the little girl. Her hat, blouse, boots, and body are standard applique. The skirt is a couple of layers of lace...gathered and tucked under the vest before it was appliqued totally into place along that lower edge. The hat has a packaged flower attached. Her hair is made from long bullions using #5 variegated floss from Happy Hands.

The blocks are simple quick stack/whack neutrals. This quilt was fun and make up pretty quickly. It measures about 24 by 30 so should make a nice doll size quilt for Evie.

Each year our quilt guild does a little "gift baggie" for members; if folks wish to contribute then then make (or obtain) a little item to include into the baggie. I've been toying with several ideas for this year...and one of them was a "donut" pin cushion that I saw on Pinterest. The idea has evolved...and I thought I'd share the adventure of designing with you...and give you a free pattern or two as well.

Donuts on Pinterest are the traditional type with the hole in the center. But, that was more work than I wanted to do since I would be making forty of these. So, why not a "filled donut" with glaze and sprinkles instead. 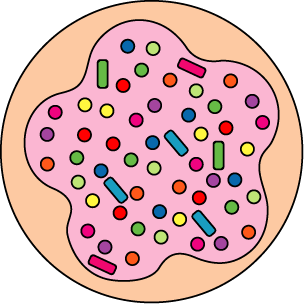 So, I pulled out some pink felt and cut the "flower shape" for the donut glace portion...then found some cream upholstery weigh damask for the background and back layer of the donut. Spent two days hand stitching each glaze felt piece to one of the backgrounds. Next...sewing on those beads! THIS is about the time that my enthusiasm gave way to reality...there was just no way that I had the time to sew on ALL of the beads needed to really make these pincushions great. So, "plan B" entered my brain.

Embroidery was so much faster...and still very beautiful. So, why not place an embroidery scene on the felt background? But what would be a good design? Off to the computer again...and a rose sprig was my solution. 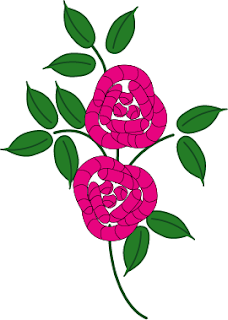 It fit the shape of the "glaze" nicely...and could be worked up much faster than stitching thousands of beads. 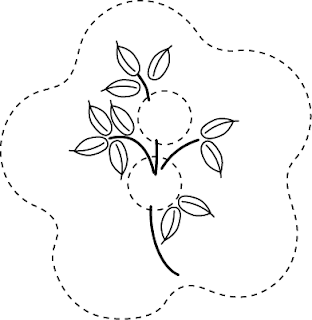 So, I'm off to transfer the design to some tissue paper for over-stitching to the felt (since you can't really trace on to felt easily). I'll post a photo when one of these forty pincushions is finished. Wonder how the design will FINALLY play out...might still have to add a couple of beads or some French Knots?
Two patterns resulted from this design adventure...and here are links to each if you'd like to give these pin cushions a try:
DONUT PINCUSHION PATTERN

Planning for holiday decorations? Yeah, I know...it's not even Thanksgiving yet. But...you know that "planning" begins when we start to think about all of the winter holidays.

Thought a nice new holiday pillow might be nice for this Christmas. So, played around with a design today. Thought that my readers (you) would possible enjoy creating this in fusible cotton or wool fabrics. If you do, I'd love to see a photo of your creation!

The letters could be any color...here is a gold version (but blue or purple could work as well).

The holly for the sheep is nice...but a "jingle bell necklace" is another idea if you want this to be more of a winter scene...and not specifically holiday themed.

I'm working on a holiday dishtowel which is a fusible applique project. 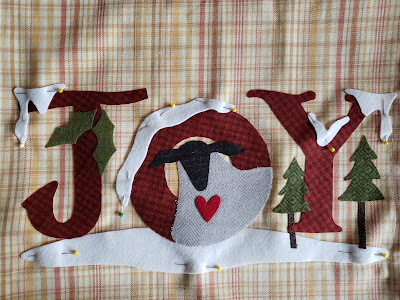 These are the layout tools I'm using, and one of them is really inexpensive and handy to have around. 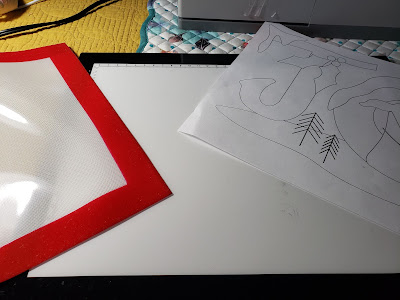 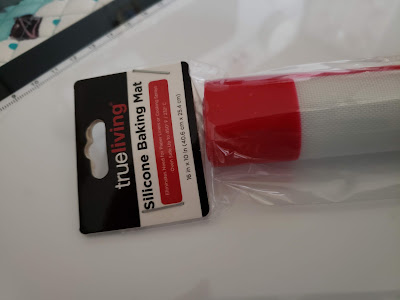 Surprise! The pressing mat is actually a baking mat...that is designed for placing on a cookie sheet for baking. But, since the center area is white....it is pretty "see through". 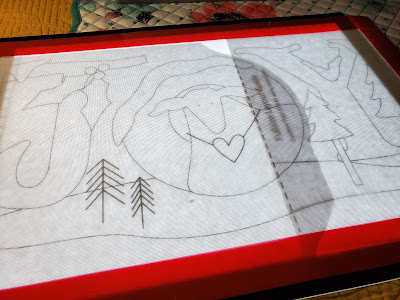 As you can see in this photo...the pattern is on top of the light table but under the baking/pressing mat. So, it was easy to layer the fusible applique pieces and "spot weld" them together. Then the entire scene could be moved to the fabric tea-towel for pressing into place. I did encounter a problem...not related to the mat; the white "wool" for the snow just would not adhere to anything...thinking it must be more synthetic than wool (false advertising...dang it)...so had to go back and pin each piece of snow into place. (hence the pins in the top photo).
Anyhow, this post is about using an opaque "baking mat" in place of a more expensive mat designed for applique. I found this mat at Dollar General in their clearance section for 3-bucks! It was 50% off...so regularly priced at only six-bucks. Think these could also be a Dollar-tree item..and will be looking there in the kitchen area for such great finds too. I know a few quilting sisters in my guild that might like one of these.
No comments: