Thought I'd share some more of Thearica's block with you today...and I'll post the entire block tomorrow! 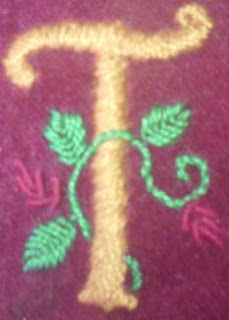 The block was a job to work on because Autumn blocks have a lot of oranges and golds to really bring out the colors of that time of year...and can be difficult if your stash is mostly pastels!! 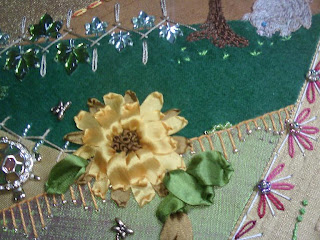 But, I went through all my little drawers and containers looking for any thread, fiber, bead, and ribbon that would work! Do you see the little inch worm above? He is so small...I hope Thearica doesn't think he is just a mess of beads! I've shown you the tree before...but here is the photo of it completed! And the piggy is filled in too! BTW, Thearica collects pigs...which is why I included a couple in the block. 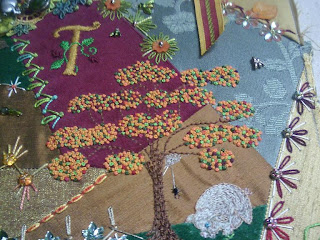 Thearica also asked if I could stitch a St Bernard on the block...in memory of a dear lost pet of her husbands. I said I'd try...and I did...and it was awful. But, luckily, after some cyber searching...I found a machine embroidery patch that worked beautifully! (And if you look at the embroidery work on the pig under the tree...you will agree that a purchased patch was a GREAT idea!). 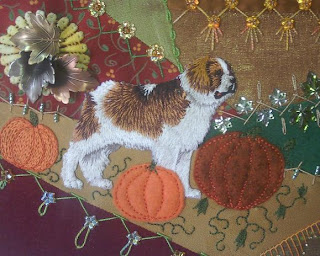 I love button clusters, and here is my version of an Autumn one! I hope you like the photos...and tomorrow I'll post one of the entire block so you can see how everything came together! Thearica will have received the block...and had time to post on the message board that she got it.