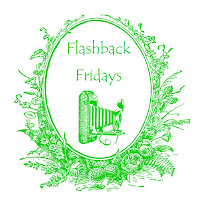 As I was blog surfing the other day, I came across a topic titled "Flashback Fridays" which included older photos of the blogger's family. This was intriguing to me. So, thought it might be of interest to ya'll as well. My photos will include family...but will also include past fashion and such as well. 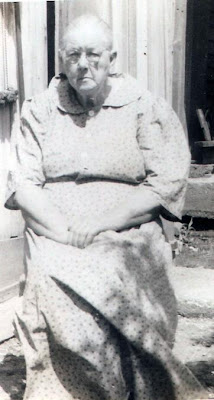 To start off, this is my Great-great grandmother Farmer. I was too little to remember when she passed. She was a large woman; very tall and very sturdy. My mom thinks that she could be where my love of stitching came from...as she was always doing something with her hands. In her time, it was usually hemming pants, sewing buttons, darning socks, or crocheting. She was a work horse...cooking 3 large meals each day, washing clothes by hand, canning foods, gardening, taking care of the house and her seven children. Sunday was the only day she was still...and Mom says her thumbs were constantly moving as she rocked in her chair...as though they just could not keep from doing "something". She is the mom to my Grandfather Robert Farmer her youngest child...and she babied him. 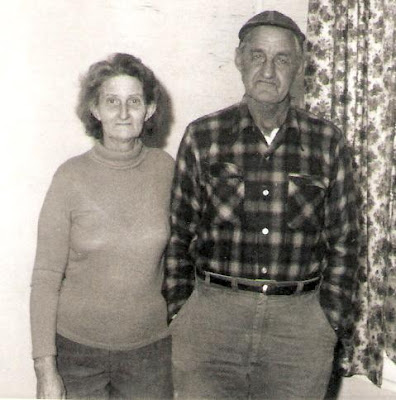 Here are my grandfather and grandmother...Rob and Margaret Farmer. My grandmother did not sew that I am aware of...but she is the only grandmother I have as my dad's parents did not live near us. I only met my grandmother Seaman once in my lifetime...and I was in my 40's by then. But, that's another story...for another time perhaps. I spent time in the summer helping them in their chicken houses when I was a teenager. When I was younger, we lived with them some of the time, and played in their yard. My grandmother always made the best breakfasts when we stayed in the summer!...or perhaps it was just that I was so hungry after working!