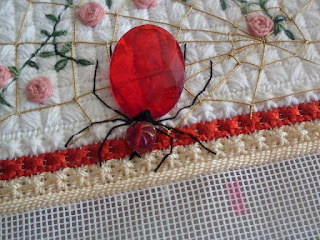 The whopping big red bead is what Colleen mailed to me to work with. It was a challenge to me, both in color and in size.
Here's the story, and the pictures:
Colleen and I decided to exchange purses. We picked a date well in advance (the first problem) and exchanged cabochons to add to the purse...hence the challenge! (the second problem). We were excited and our little brains started to whirl with ideas! But, none of them seemed just right for such a special friend...whom we wanted to please. So...time rolled on, and we procrastinated. We moved the deadline twice...and still, no "stupendions ideas" would come. We finally just kicked ourselves in the butt...and proceeded. In the end...my gift to Colleen was not a purse...but an organizer (which she has received and is overjoyed with). I'm waiting on my gift which Colleen has mailed...but I can share my creation for her with you now that she has opened it!
Here are photos of the finished organizer...full of pockets...front, back, and inside!
My first issue was the bead. It was not a true cabochon (flat back)...but a rounded bead with a hole at the top. So, it would not lay flat...it reminded me of a spider butt. So, that's the direction I went it...a huge honking red spider! Yikes! So, a spiderweb was needed...but on what? I decided to do a needlepoint background..then the web...then some green vines/flowers. 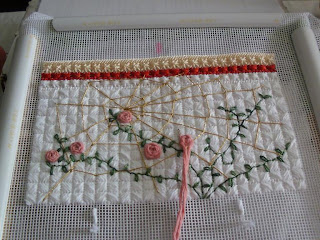 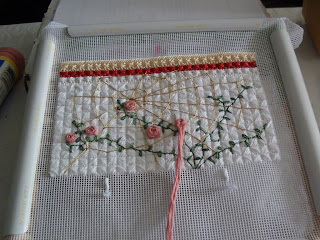 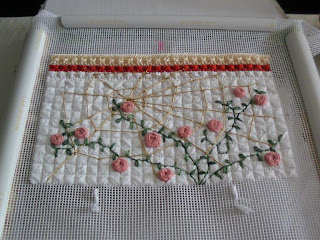 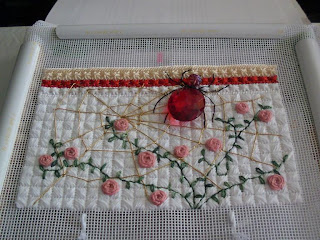 The initial ideas was to do a small purse. But...it was not to be! As the design grew...so did my need to make it "something usable". And, the honking big spider was scary just on a purse! Didn't want folks beating poor Colleen when she carried it...trying to "kill the spider" that was on her! So, I added a fabric border and turned the needlepoint into a focal point of the "purse" organizer. Here is the front: 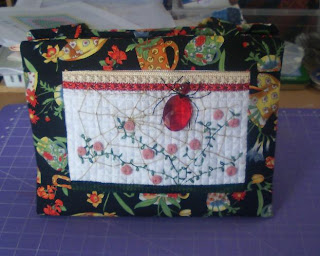 Adding the borders also made it "bigger" so it could hold STUFF! The teacup fabric is some Mary Engelbrit fabric that Colleen has gifted to me the previous year...so I thought she might like it (and I was right!). 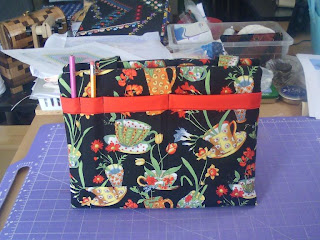 The back has pockets for pencil/pin/cell phone/scissors...etc. I thought it would be a good organizer to take to any classes or stitch-a-longs. 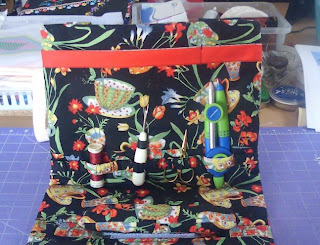 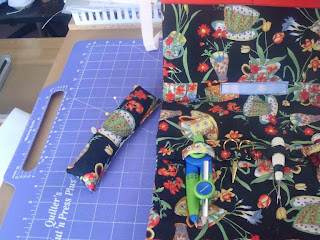 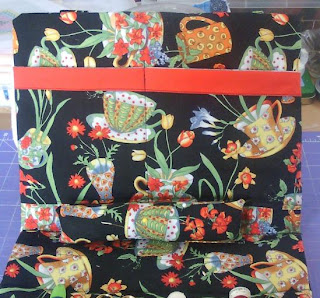 The inside has more pockets...a covered elastic band to hold thread spools and such...and a detachable little pin cushion. There is no pattern...I just "thunk it up". The front and back have cardboard inserts to help keep it sturday. Easy to do your own...just do the inside w/pockets and such...then the outside with pockets and such. Next, slap them together...good sides facing. Insert handles and stitch all the way around...leaving an opening to turn. Turn right sides out...close the opening...and put a couple of horizontal seams at the bottom to stablize. Attach your velcro pin cushion and you are done! An organizer like this could be make any size you want!