Homework Can Be Fun... 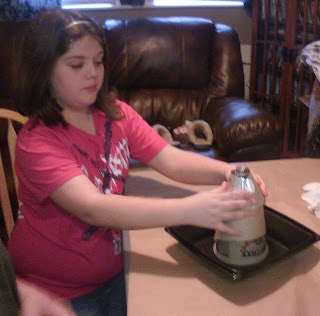 as Aidan found out on Monday. She was required to build a volcano for science class. Thankfully, they are not going to add the baking soda and vinegar until class on Friday...so, I didn't get all the "mess" of the exploding volcano...just the mess of the Playdough (kid's clay). 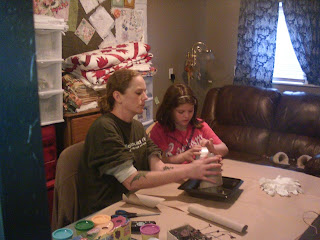 It was a treat to watch her and her mother (my daughter Sommer) working together to get the project completed. 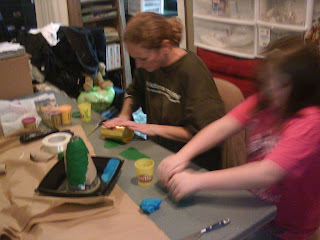 We set up the folding table, which takes up the entire little area of my living room/craft room in this little apartment, but it was worth being crowded for a little while. 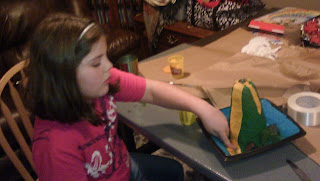 Here is the almost finished project. It had dried out a little by the following morning, so Aidan did add a little more Playdough to it before taking it to school. 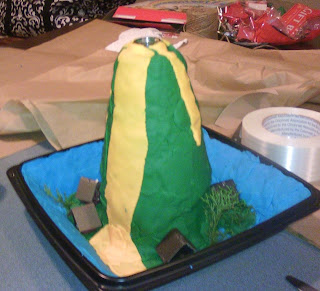 This was a pretty cool project, and not nearly as messy as I first thought. The black "tray" is a disposable container bottom, the bottom is a plastic small soda bottle. It is held in place by an inverted butter bowl...which is held in place by stapling the lid of the bowl to the container bottom. We added a plastic trash bag to the top of the butter bowl, wrapped around the bottle...then some cardboard from left-over cereal boxes (which I save for the cardboard). On top of that structure is the Playdough...then just add little trees and such. We found the houses on an old garland I had...and the cedar was from the tree outside. A good project for kids to learn about volcanoes, weather, Mother Nature, etc. ...and a good chance for them to use their imaginations...and just have some "together" fun.

Awesome project, and I'm sure a real joy for you to witness, I have always loved school projects with my nieces and nephews, and now it's so much FUN to see Caleb get excited about his schoolprojects,and witness how his mind works firsthand!