Now, I know…foxes are not supposed to love cupcakes. But, in fact, I do! 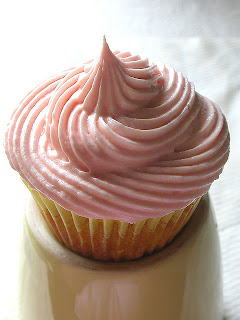 Hi, my name is Freda and I just have to tell you about my new found love. CUPCAKES are wonderful! I had no idea!
Just this past week I was walking past a neighborhood garbage can…hideous, smelly things! Yuck! I always hurry past just as quickly as I possibly can any time I encounter one of these stinky things.
But, I was so surprised to find a totally different odor accosting my nose as I scooted past this particular morning. It was a sweet smell, even sweeter than honeysuckle blossoms on a dewy early morning…lovely as they are. I just had to stop and investigate.
So, very gingerly, I crept closer and saw a box of something fluffy on top of the can. The box was slightly ajar, and I could just barely see inside of it. Whatever this was, the smell was most definitely coming from it and not the garbage can! I jumped upon a nearby bench and onto the top of the garbage can.
I know, I know, this does not sound like something a well-bred southern fox like me should be doing. But, I simply just could not stop myself! I believe I was slightly intoxicated by the smell!
The scent from the top of that can was tremendous…and I soon forgot that I was sitting on top of a garbage can!…in broad daylight! I pushed open the box until the lid fell back onto the can. What I saw was three little mountains of some kind…each had pink swirly stuff on the top. My nose told me that this was most definitely the source of all that wonderful sweet smell. I ventured closer…
Did I dare touch one? My mind was just racing with thoughts. What if they were sticky and cold? My paws would be a mess, and I had just spent the entire morning cleaning dew from them. So, instead, I decided to put my nose just a smidgen closer and inhale more of that wonderful scent.
As my nose got close, well, I really just don’t know how to properly relay what happened next. I mean, I just must have blacked out or something…a seizure of some type perhaps…The next thing I remember was waking up…sprawled across the garbage can with this bright pink cloud spread all over my paws and stomach! Appalling behavior!
As I began to come around to my normal self again, I was so embarrassed at my present state that I jumped from the garbage can and ran behind a mulberry bush! Slowly my heart began to beat at a more regular pace and my brain seemed to be clear of the abnormality it has recently suffered. Of course, I still had this pink cloud to deal with on my fur.
What was I to do?, there was no way I could make it all the way back to home with this all over me, and it had to go! So, gingerly, I put a paw up to my mouth and barely putting my tongue out, licked just slightly to see if it would come off.
Well, what a shocker! The pink cloud tasted wonderful…and, immediately, I saw visions! Visions of me gobbling down this pink cloud just as fast as I could. Oh my, my!…these are not visions! This is memory! This is what happened on top of the garbage can!
What! I could not believe it! I would never act with such abandon…never…never…never! (And dear reader, it is with absolute horror that I relate this behavior…even hours later!)
AND, much to my chagrin,... there was a witness to my display that day! Mr. Owl had been watching the entire episode from his oak tree branch! He swooped down to the mulberry bush to offer his assistance (and I’m sure to let me know that he HAD seen everything). I was just mortified!
But, being the proper southern lady that I am…I did not act as though anything out of the ordinary had just taken place.
“Good morning Mr. Owl” I proclaimed…with pink cloud on my belly…”How are you feeling this fine morning?”.
“Oh, I’m doing quite well Ms. Fox, quite well indeed”. “Are you enjoying your cupcake?” he exclaimed. “They are very messy are they not?”.
“Cupcake?” “So, these pink clouds are cupcakes?” “What is a cupcake?” I stammered.
“Well, cupcakes are tiny little cakes with sweet sugar icing. They come in many colors, and these are a bright pink. Most every morning the baker has some extra of the tiny cakes and he leaves them here on top of his garbage can. Sometimes the squirrel family comes by and gets one, or I have even seen Ms. Opossum and Ms. Raccoon take them now and again. However, they have both told me that their children are most unruly after eating them” shared Mr. Owl.
By this time, I had successfully licked all of the pink cloud…oh, I mean, pink icing…from my fur. It left my fur sticky and I smelled very much like a pink cup cake myself. Surprisingly, I found myself suddenly in quite a content state ...just warm all over...and in need of a long nap. So, using my best southern drawl I bid Mr. Owl a hasty goodbye. “I must be going home now Mr. Owl, but I’ll come back to visit with you again soon. Ya’ll take care now.” 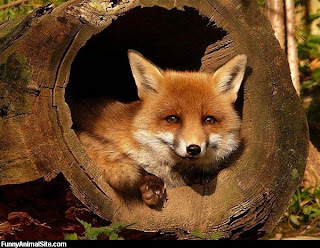 I am feeling so much more like myself now. I have had a proper bath and a nice long rest. After supper, I shall visit some of my friends…and try to get to bed early.
Tomorrow, before the sun has risen, I shall be hiding in the mulberry bush waiting for Mr. Baker to deliver those cup cakes again. I must get there before Ms. Opossum, Ms. Raccoon and Ms. Squirrel!
Note: Most every evening I tell my granddaughter a bedtime story. Long ago, I already finished telling all of the most memorable of the traditional fables and stories. So, since she was about three years old (she is seven now) I have just been making up stories. She picks an animal or two…and I make up a story. Then, I pick an animal…and she makes up a story. (Her story is very often similar to the one I just told, but with different animals)…although, sometimes she really surprises me with a totally new story. It is pure joy…and I encourage you to try this out with the little ones in your family. When I dreamed up Freda Fox and her love of cupcakes Aidan was giggling so loud at “seeing her” licking the cupcake and hiding under the bush! So, I thought ya’ll might enjoy the story too.