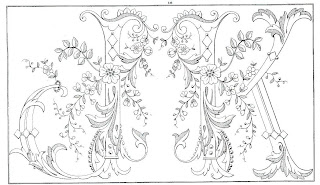 Hi! Resently I read an article on why the letter J is missing in very old samplers. Originally there was no letter J. The J was introduced in the 14th century as a more ornate letter I. The letters I and J were used interchangably and sounded the same. By the end of the Middle Ages the letters started to seperate and began to have their own sounds. Durning the 17th, 18th and 19th centuries it became customary to use the letter I to represent the letter J in samplers. So you can do whatever you like with the missing letter. It seems that the J is actually an ornate I and the designer skipped the letter J. But if you want it to look period specific use the information above. I got the information from an article in "Just CrossStitch" magazine by Darlene O'Steen.

Thank you, Lois, for the above info. My brain is full of trivia