I've shared this little tutorial with the Patreon Ladies recently...and though all of my blog followers might also like to think about stitch relationships. The question being..."If stitches were a family, would would be cousins? or even siblings perhaps?" That might seem like a strange conversation to have with yourself...but consider the similarities of just these few embroidery stitches. 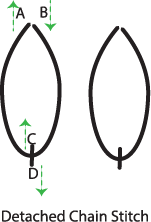 While some folks like to create the Detached Chain Stitch by needling up/down in the same hole...it is often best to give yourself a thread or two between these positions for stability and ease of stitching.
Needle up at A and down at B; leaving the thread temporarily loose. A loop is formed as you pull the thread after having needled up at C. The loose thread is captured by the needle since it is passing under the needle, being therefore restrained. Needle down at D to create a short tacking stitch to hold the loop into place.
If you use the "scoop method" of stitching...then needling down at B and up at C would be done in one motion. The A and D motions would be "stab method" because they don't need to scoop. 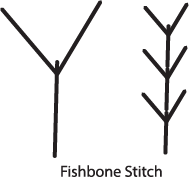 Logically, the same reasoning holds true for the Fishbone Stitch. The only real difference between the Fly Stitch and it is the length of the tacking stitch (distance between C & D needle positions). Fishbone Stitches are most often created in a vertical line...resembling then the backbone of a fish; hence the name. 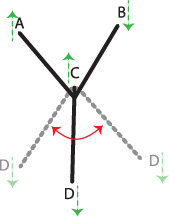 Changing the angle of a portion of a stitch...like this vertical tacking stitch on the Fly Stitch alters the look of the stitch...and opens up more options. Feather Stitches are similar to Fly Stitches or Fishbone Stitches...they only need the direction of the C/D needle positions shifted to the left or to the right. 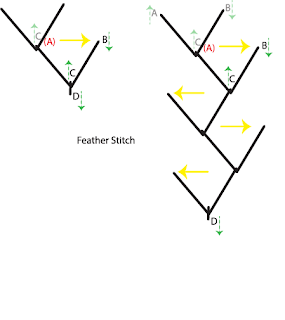 The above diagram is busy...but let's break it down to the basics. We begin with an open Chain Stitch...needling up at A, back down at B...and scooping up at C. Instead of needling down directly below...we move out needle to angle to the right. If we consider the angle and space being consistent...then the result would appear as the diagram above. Our "C" becomes a new A...in this manner; and we continue along until we have stitched the amount of these needed...then we tack the last one down. Moving left and right creates variations of the Feather Stitch. 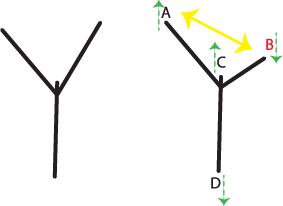 Note how changing the angle between A and B shortens one side of this diagramed stitch. Doing this can create variety in your Feather Stitching and is very helpful when trying to fill in an odd shaped space with stitching.

Loops can even be incorporated into stitches by twisting the fiber before tacking it down. This is easily done if you "scoop" between B and C as the thread can then be passed OVER the UNDER the needle before tacking. This causes it to "cross over" itself creating the loop.


So, I hope you have enjoyed this little tutorial and might consider how some stitches are related to each other...if just in their manner of creation. For beginners...IF you can learn the Detached Chain Stitch...then so many others (as noted above) are certainly within your grasp as well.

Hoping your stitching is enjoyable. Hugs!