Spending a lazy morning surfing the net and doing a little house-keeping on the computer. Have a sinus headache, so don't feel up to stitching or much else right now. But, my spirits were lifted by some old photos of my granddaughter, Aidan. I call her my "punkin", and I have no idea why...just did one day and it stuck. Of course, after a few times..Grandma had to explain that I was not calling her a pumpkin...but a "punkin". There's a difference...one is a vegetable...and one is a term of endearment. She is my sunshine on a rainy day. So, indulge me for a few moments...and I'll share my punkin with you too!

This is a little blury, because it is just a small avatar size photo. It was taken about two or three years back. I put a washcloth in a small Q-snap frame and let her "sew" large beads on it. They are willy nilly of course, but she felt so accomplished. The needle was a tapestry one, so the point was not too sharp. And the beads had to be really big so it would fit...but they worked best for her little hands at the time anyway. 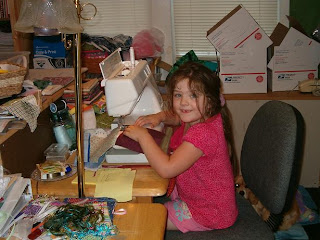 Here she is last year, sewing some blocks together. My Janome has a function that lets it sew "super slow" so I know she won't "probably" won't get hurt...but still, right after the flash went off I was saying "pay attention, watch what you are doing". She says Grandmothers worry too much. LOL!

And, Yes, my sewing room is messy like this most of the time. In a tiny garage apartment, there isn't much room. So, I do not have the luxury of much surface space. It's a constant battle to put away scraps and stuff from one project to another. Okay, from one dozen projects to another...I do not work on only one thing at a time...if I did, I'd never get anything finished! 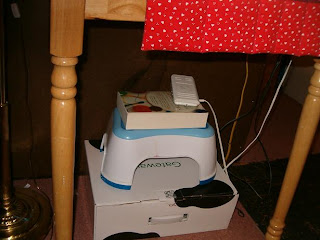 For Punkin to reach the footpetal we stack some stuff up! 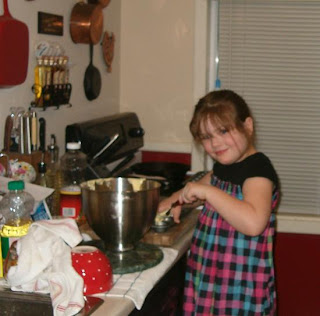 She's also a good helper in the kitchen. Here, she is filling some muffin tins for me. And lastly, here is what she looks like today. 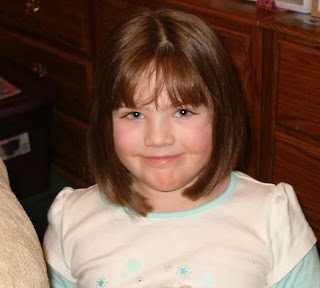 Hard to believe that she'll be turning seven years old on the 2nd of November! Seems like yesterday when we were bathing her in the kitchen sink!

Hope you enjoyed my little visit with my Punkin...thanks for indulging grandma!