Cyber friends are such treasures to me. And, this week I was reminded more than once of how much more fun my stitching has been since going "on-line". It was also the week to complete a few things for friends, so I thought I'd share those with you all. Hope you get some inspiration to stitch! 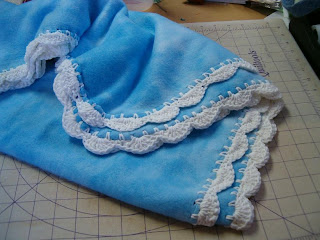 Here is a flannel blanket and some bibs for Miss Mikol, who (after 3 girls) is having a boy! Woot! Woot! I think that is just great. So, when I saw this super fast pattern for baby bibs I immediately thought of her. It took only about 3 hours to whip up nine bibs...from selecting the fabric to sealing the box I mailed them in! Now, that is a great project to work on!

If you would like to stitch some of your own the Nested Bib Pattern is free! It's found under Things to Make and is their Basic Bib Pattern. I changed the assembly instructions to suit me. The original instructions had velcro as the closure...and that is good; but I don't like sewing velcro. So, I used little covered elastic pony tail holders as the "loops" and big buttons (extra securely stitched) for the closures. The original pattern also had a little pocket across the bottom, but I did not see the need of that, and just made reversable bibs instead.

To accompany the bibs, I stitched up a baby blanket super quick! A square piece of fleece with "slits" cut in the edge (about 1/2 inch from the outside edge) creates a great "soft as a cloud" blanket. The edging is a hand crochet shell stitch and single crochet (alternating) all the way around. The stitching is done with all-cotton yarn so it is really soft as well. It takes about 30 minutes to cut the blanket out of the fleece and make the holes. And, another 45 minutes to crochet the edging. If you want to do your own blankets, the rotary cutter blades used to make the holes can be found at Skipstitch, and the yarn I got at Walmart. 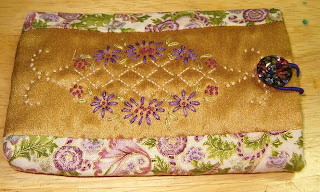 This eyeglass case was great fun to do for a friend to present to her Secret Friend. It has a simple embroidery center and has a closure (similiar to the bibs) to keep the glasses from slipping out. The embroidery is straight stitch, french knots, and lazy daisy stitches...and ya'll know by now that I can do those in my sleep! If you don't believe me, just check out the Two Dozen in Twelve Months (TDITM) posts!

And, for you TDITM fans...no I have not given up! I will be posting more soon!

Lastly, the next little giftee is a Mug Rug for Jill. It has embroidery on it as well. And a little pieced block on the opposite side.

The pumpkins and the center eyeglass case embroidery patterns come from a Flickr site I belong to that posts hundreds, if not thousands, of free embroidery patterns for sharing. So check them out sometime at Hooplove. I know that I've recommended them before...but it never gets old to support good sites!